With over 100 years of collective experience in the manufacturing of chill-water air conditioning systems for yachts, it’s assured only the highest quality, and craftsmanship will be delivered.

When selecting chill-water air conditioning systems for your yacht, purchasing the correct equipment, from a company that will be there to assist you with integrity and the highest level of customer service, goes hand in hand.

Seann Pavlik, is a lifelong boating enthusiast and yacht designer and the founder and owner of sister companies Frigibar, Innovative Products, LLC, Misters Unlimited™, and IceFree™. Seann is a South Florida native, who has lived and worked on the water his entire life. He has years of experience designing unique and innovative products to help solve everyday issues he has personally experienced, both in the water and on land. His passion for innovation and commitment to excellence have been the driving forces throughout the development of the products he creates. Making these products available to you to help make your life easier and more enjoyable on the water is his passion.

There Is No Substitution for Aqua Air Chiller Systems

The History of Aqua Air

James D. Nall Company was established in 1941 in Miami, FL, and incorporated in Florida on August 20, 1965, in to become James D. Nall Company, Inc. In its infancy, the Company performed sales, installation, and service of marine refrigeration and air conditioning systems.

In the early 1960s, Marine Development Corporation (“MDC”), at the time the leading manufacturer of marine air conditioning systems in the 5-48,000 BTU range (.05-4-ton range), appointed James D. Nall “Master Distributor” for Florida in recognition of the good relationship and excellent reputation that the Company had forged in the industry.

In the early 1970s larger yachts were being built and Mr. Nall saw a niche in larger capacity, chilled-water air conditioning systems due to the impracticality of using multiple small direct expansion systems on larger yachts (up to 70 feet at that time).  He approached MDC with the idea to manufacture the larger systems, MDC declined. Shortly after, Aqua Air Manufacturing and the Aqua Air brand were born.

By 1972 the company had manufactured the first marine chilled-water air conditioning system and unveiled it under the Aqua Air name. The two original systems built, the 2 1/2-ton chiller and later the 5.0-ton twin compressor unit, received excellent acceptance within the industry. These chilled-water systems were smaller, lighter, and drew less electrical power from the vessels’ power source. 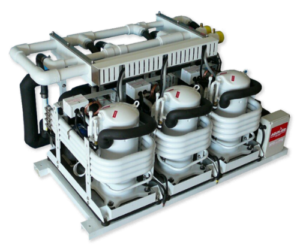 After Mr. Nall’s distribution relationship with MDC ended in 1982, Aqua Air began to manufacture a line of self-contained and split direct expansion systems to compete directly with MDC’s units. The self-contained units are typically installed in vessels lacking engine room space for a remote condensing unit and can be installed under a berth, in a closet, or other underutilized spaces of a smaller yacht.

Aqua Air’s self-contained systems come in capacities of 5,000 to 24,000 BTU. The split systems are available in 4-60,000 BTU and are used on the larger yachts where the condensing units are mounted in the engine room and evaporator coils in the cabin space. These units first became available for sale in 1983.

In 1987 the company moved to a larger facility in Hialeah, FL where it remained for 32 years until it briefly ceased operations in 2019. In 2020, the owner of Frigibar, Seann Pavlik, acquired Aqua Air and moved its operation, engineers, and builders to their current facility in Fort Lauderdale, FL.